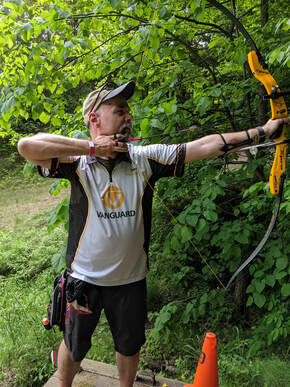 Tony Leger found archery later in life at the age of 36. After relocating to MI from MA with a few years in CA falling between, Tony found local club and range Detroit Archers in West Bloomfield, MI. Giving archery a try and enjoying it very much, he made his way to Spot Shooter Archery to purchase his first bow. Thinking that archery was mostly for hunting and 3D, Tony found there was another side to it…target archery. Within a year Tony was competing at a local level.

A few short months later Jim Beasley, owner of Spot Shooter Archery, asked Tony to be part of his shooting staff due to his near infectious love of the sport and overall passion when speaking about archery. It wasn't long after that Tony joined PSE’s Field Staff. Competing on the local level and eventually state level, Tony has received numerous awards in the Freestyle Compound division. On a whim in 2014, he put aside his compound bows and made the switch to Olympic-style recurve for target and recurve barebow for 3D. Within the first few months shooting recurve, Tony placed 2nd in his first indoor state event and a few months later finished 2nd in his first state outdoor event.  This was followed shortly by his first state championship title. A smattering of other top 3 showings both in target and 3D fell in between.

He's not just about shooting and competing either. Tony is a Level-2 USA Archery instructor, USA Archery Judge, Detroit Archers board member and the Vice-President of the TCAA (Tri-County Archery Association). Tony believes in growing and advancing the sport of archery and sharing the joy of it with others. To do that, he remains active within the community from an administrative perspective as well by organizing, running, and officiating archery events.

He now shoots recurve exclusively at the local, state and national levels.  Beginning with the 2017 year, Tony has left PSE to explore the shooting equipment of other bow manufacturers, specifically Uukha, as he believes that innovation and forward progress in the sport is important to the growth of the sport on all levels.  Most recently, Tony has been officially added to the Ram Rods Archery pro staff and Vanguard Outdoors shooting staff while maintaining sponsorship and support from his previous sponsors.

As of early 2021, Tony returned to his home state of MA where he has joined Nenameseck Sportsman's Club and has resumed his archery career beginning with the 2022 indoor season after suffering a double shoulder injury that saw him slow down and eventually fully step back from competing for nearly a year and a half.